In the early church, Baptism in the name of Jesus was seen as a way of receiving the Holy Spirit.  The first Christians linked the baptism of Jesus by John the Baptist at the Jordan with the Pentecost experience of the outpouring of the Holy Spirit. They were profoundly conscious of being formed by the Spirit and understood that through the coming of the Holy Spirit they would receive the power to bear witness for Christ (Acts 1:8). A simple water ceremony initiated new Christians into the church; no formal preparation was required (Didache, 151)

Before long, however, many Christians were enduring persecution and even martyrdom for their faith.  To assure that those desiring to become Christian would be strong in the face of suffering and death, and to prevent the possibility of scandal through apostasy ( public denial of Christ by Christians), the faithful sought a more formal structure to test the seriousness of their commitment.   This extended preparation time became known as the Catechumenate, and the steps along the journey were marked by rituals and anointing.  This process came to its full realization at the Easter Vigil when the three sacraments of initiation (Baptism, Confirmation and Eucharist (Holy Communion) were celebrated.

In 313 AD, other changes occurred.  Constantine was crowned emperor and converted to Christianity.  He issued a decree declaring Christianity the religion of the empire, ending Christian persecution, and giving the Church religious freedom.  “Becoming a Christian became the popular thing to do as Church and state began to blend together.  In time the Catechumenate became overwhelmed by massive numbers.  Eventually, most of the unbaptized left in Europe were new-born infants.  The Catechumenate process gradually fell into disuse, and other practices developed, some of which continued right into our own century”(Dues 151, 152).

Until the 5th century, the Church celebrated the sacraments of baptism and confirmation in one continuous rite of initiation which culminated in a Christian’s admission to Eucharist.   This was true for persons of all ages, including children.  The baptismal washing and anointing by the priest were followed by an imposition of hands and anointing by the bishop.  Confirmation was seen as a natural extension of baptism, perfecting what the Holy Spirit had accomplished in the initial sacrament.  While still two distinct sacraments, the celebration was called the ‘double sacrament’ (CCC 1290&1291, Bishop Aquila 295).  The instruction process for the Neophytes (newly baptized) continued even after the reception of the sacraments at the Easter Vigil, helping them to become more involved in the community.

By the 11th century, it was considered a grave responsibility to baptize babies as soon as possible after birth, . . . a consequence of a high infant mortality rate and the conviction that the unbaptized could not be saved.  In the 14th century, it became Church law and remained the usual practice until recent years.  Eventually, baptism was no longer closely associated with the annual Easter experience.  Adults were baptized in a private ceremony following a period of private instruction.  The ordinary celebration of baptism associated with infants was a rather simple ceremony.

Confirmation is a kind of accident in the development of Catholic sacramental rituals.  During the first four centuries, there was no uniformity in the initiation ritual as a person was led from the waters of baptism to the table of Eucharist in the same night or early dawn. Generally, the newly baptized were welcomed from the waters by the bishop. . . .When it became the usual practice in local churches to baptize infants as soon as possible after birth, the bishop could not always be present for the special anointing and welcoming ritual. [So] the anointing took on its own character … [and was] called confirmation [by] the mid-5th century  (Dues 152).

Between the 9th and 13th centuries, confirmation was seen as the sacrament which strengthened the faith of the baptized.
Local church authorities mandated that infants and children be confirmed early in life, usually before the age of two. What we witness today as the sequence for reception of the sacrament was determined in part by Pope Pius X.  In 1910, “he encouraged first Eucharist at the age of discretion (7 and above).  This decision had the effect of placing the reception of first Eucharist before the reception of confirmation, which then, generally occurred as early as 7 and as late as 18.  This order (infant baptism, first Eucharist at the age of discretion and confirmation any time between 7 and 18) is the more common pastoral practice today” (Aquila 295).

The Second Vatican Council (1962-1965) called by Pope John XXIII was considered the greatest religious event of the 20th century.  It was to be an experience of renewal, of opening the windows of the Church and allowing the Holy Spirit to work afresh among us.  One of the great outcomes of this Council was the reinstatement of the ancient process of the Catechumenate.  The Rite of Christian Initiation of Adults was canonically approved by the National Conference of Catholic Bishop in 1986 and became mandatory in every diocese of the United States on September 1, 1988 (The Rites 29). 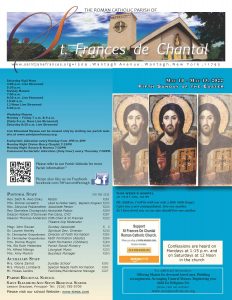